A Global Monograph of <i>Viburnum</i> 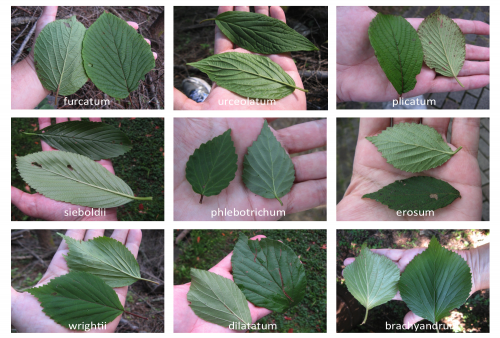 With support from the NSF (DEB-1145606), we are working on a thorough taxonomic treatment of the Viburnum species of the world. The Co-PI’s on this project are Patrick Sweeney (Yale), Wendy Clement (The College of New Jersey) and Bill Piel (Yale-NUS College (Singapore)).

Viburnum contains ~170 woody plant species in temperate and subtropical forests around the Northern Hemisphere, in Latin America, and Southeast Asia. Over 70 Viburnum species are utilized in horticulture, and many are ecologically important. Building on years of prior research, and based directly upon herbarium specimens and new collections, the goal of this project is to resolve all remaining species-level taxonomic problems and to produce a comprehensive description of the entire group, with geographic range maps and richly illustrated interactive identification keys that can be deployed on the web and in the field. All data will be internet accessible and proactively integrated into global biodiversity databases.
This project will produce a global treatment of a widespread, taxonomically confusing, and horticulturally important plant lineage. In doing so, it will generate a new phylogenetic classification/nomenclature and informatics tools of general value to the scientific community. This work will increase the value of Viburnum as a model for addressing fundamental issues in evolutionary biology, ecology, and global change. The project will model the use of knowledge of evolutionary relationships in producing a species-level taxonomic monograph, and will provide hands-on training in modern, collaborative, cyber-enabled systematic biology.
Clement W. L. and M. J. Donoghue. 2011. Dissolution of Viburnum section Megalotinus (Adoxaceae) of Southeast Asia and its implications for morphological evolution and biogeography. International Journal of Plant Science 172: 559-573.
Clement W. L. and M. J. Donoghue. 2012. Barcoding success as a function of phylogenetic relatedness in Viburnum, a clade of woody angiosperms.  BMC Evolutionary Biology 12: 73.
Clement, W., M. Arikake, P. Sweeney, E. J. Edwards, and M. J. Donoghue. 2014. A chloroplast tree for Viburnum (Adoxaceae) and its implications for phylogenetic classification and character evolution. American Journal of Botany 101(6): 1029-1049.
Additional NavigationClose